The IMF in its annual Article IV review of Japan (main report & background studies) “Mild deflation for over a decade has contributed to lower private investment and consumption by sustaining high real interest rates and raising real levels of debt. In addition, deflation has reduced tax revenue, and made it more difficult to contain real spending, which led to a rise in public debt-to-GDP. An exit from deflation is therefore essential to support the recovery and to facilitate fiscal consolidation.” END_OF_DOCUMENT_TOKEN_TO_BE_REPLACED

Japan’s current pension system needs to be reformed to make it more sustainable as Japan’s population continues to age: “Its life expectancy has increased over time to 83 years which is the highest in the world today.” Japan’s population ageing and low fertility rates are working in conjunction to raise the nation’s old-age dependency ratio, which is the ration of how many retirement age people there are to how participants in the labor force.  Japan’s uses a pay-as-you-go pension system that is putting a higher burden on today’s working generation because the have to support a higher ratio of retirees. The old-age dependency ratio “is expected to rise from 38 percent in 2010 to 57 percent in 2030.” END_OF_DOCUMENT_TOKEN_TO_BE_REPLACED

How does the state of the market for certain goods reflect on our overall economy. This question is explored in the beginning line of Cheers, Japanese Beers by Hiroyuki Kachi: “If the country’s thirst for beer is anything to go by, Japan is back in the groove.”

Beer consumption is up by .4% over last year in the same month to 47.37 million cases. This is the first year to date gain since 3/11.

It is unclear whether in Japan beer is a normal good, whose consumption should decrease during a recession, or a vice-good that is immune to  recessions in Japan. For comparisons sake, in America the evidence points to beer being a vice good. Durring the height of the great recession, the consumption of beer was down less than 1% in Nevada and Utah according to a study by Donald G. Freeman at at http://www.beeronomics.org/papers/1A%20Freeman.pdf

Trade economist Alan Blinder in analyzing how new technology will affect international trade, has predicted that Services will become more outsource-able as technology continues to develop. In the past, trade was limited by our ability to transport a product from one location to another:  “any item that could be put in a box and shipped (roughly manufactured goods) was considered trade-able and anything that could not be put in a box (such as services) or was too heavy to ship (such as houses) was thought of as nontradeable.” Now as the internet becomes more secure and reliable, the range or products that we can deliver over long distances is expanding to include services as well as manufactured goods.  Considering the role services play in the Japanese economy, accounting for almost 20% of GDP in 2010, a massive movement of service jobs out of Japan would have massive effects on the composition of the Japanese Labor force and its economy in general. 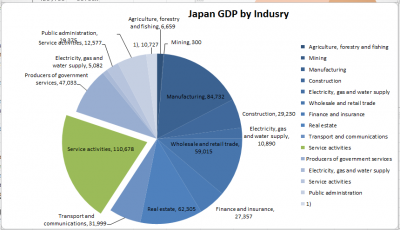 Not all service jobs are vulnerable to outsourcing. Some jobs are improved by proximity or physical contact with the provider of the service, such as hair-cuts, surgery, and childcare. Others like accounting and Technological services are particularly susceptible. 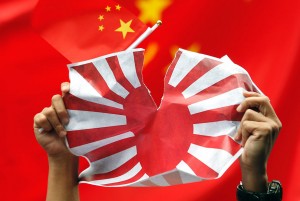